This questionnaire tests you for your reactions towards the things listed (its incomplete).
1. Tortoise
2. Insects
3. Calfskin
4. Television viewing
5. Nude photo
6. Butterflies
7. Raw oysters
8. Boiled egg
In August 2003 The Wave Magazine presented these same questions to candidates in the local mayoral elections and reported their responses. One of the candidates, Tom Ammiano, recognized the test’s source by questions 2.
Another candidate, Angela Alioto, became agitated at the line of questioning, complaining “Let me ask you, John, how does this fit in to the bigger picture when you ask me about the tortoise and butterflies?” The interviewer’s reply was straight out of the source, “They’re just questions, Angela. In answer to your query, they’re written down for me. It’s a test, designed to provoke an emotional response. Shall we continue?”
Where do u find this? What does it determine?

Where would you find all this?

The lower section of text gives these proportions:

Like most things even X follows a certain convention while naming their works. The general convention is [gender/race/defining characteristic] [optional twist/USP] [main action performed]  [number in series]. This order is followed most of the time, except when it isn’t. However the number almost always comes in the end. There is another naming convention followed which works by using horrible puns (which is more well known) but is actually followed for a small fraction of the works.

What am I talking about?

The Omphalos hypothesis argues that God created the world recently , but complete with signs of great age. It claims that in order for the world to be “functional”, God must have created the Earth with mountains and canyons, trees with growth rings, Adam and Eve with hair, fingernails, and navels, and that therefore no evidence that we can see of the presumed age of the earth and universe can be taken as reliable.
XYism is a parody religion created in response. It claims that the Universe was actually created XY, and any memories or evidence of events before that were created at the same time. The schism known as VYism claims that the universe hasn’t been created yet, and what we think is happening now is just false memories we’ll have once it exists. Of course, some might argue that both sides are heretics.
XY and VY please. 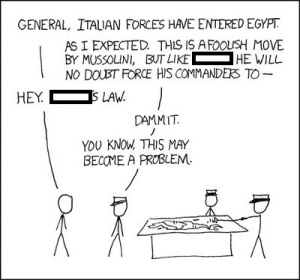 X’s law reformulated as “Usenet Rule #4”:
“Any off-topic mention of Y will cause the thread it is mentioned in to come to an irrelevant and off-topic end very soon; every thread on UseNet has a constantly-increasing probability to contain such a mention”.
What is X?
The person referred to in the law goes into the connect.
2.
Axis Powers Hetalia is a  popular anime showing an allegorical tale of the history of the world, especially during World War II, with anthropomorphizations of different countries and the various stereotypes associated with them.
In the show, Italy and X were briefly raised together as infants, before Grandpa Rome took Italy away to live with him for the Renaissance period. By the time Italy returned to his place of birth, the other children had become bullies to him.
Italy was claimed by Austria, on the behalf of X, after a period of war. The two children lived together in the same household, X harboring a crush on Italy, who he believed to be a girl (don’t ask its the Japs). However, life soon became uneasy. X  asked Italy to become a part of his empire, which he refused, remembering what had  happened to his grandfather. X left,  leaving  Austria, Hungary, and Italy behind.
Eventually, after the long period of war (almost three decades), X was believed to have died. In a scrapped strip, France broke the news to a teenage Italy that X was no more.
What is X?
X goes into the connect.
3.
X was one of the leaders of the Indian National Congress and one of the founding fathers of the Republic of India. He is known to be a social leader of India who played an unparalleled role in the country’s struggle for independence and guided its integration. He took charge of the task to forge a united India from the British colonial provinces and more than five hundred self-governing princely states. Often known as the “Y of India“(because of Y’s similar role in the unification of his own country), he is also remembered as the “Patron Saint” of India’s civil servants for establishing modern all-India services.
Who are X and Y?
Y goes into the connect.
What is the connect?

Many origins have been given for this dish.

Some say that an angered Chinese cook mixed the days rubbish in broth and presented it to San Francisco patrons who’d earned his ire only to find them coming back for it again and again.Some speak of a resourceful cook who whipped up a dish of leftover vegetables and meat to placate some drunken miners.

Russell Belk argues that, like a religion, the Cult of X is a belief system that helps its followers understand technology and the world.The attitude of Y sympathizers and fans is viewed by many as being “cult-like”.

According to neurological research cited by the BBC on their “Secrets of the Superbrands” documentary, the response from the brain of an Y enthusiast when viewing the brand-related symbols and imagery is similar to the one of a religious devotee when exposed to religious symbols and images

Y co-founder ________ is compared to a god figure and savior, and his life story is said to resemble Joseph Campbell’s heroic adventure myths. ________ was often viewed as a saintly figure to X users.

Psychologist Dave Levine argues that the X community has a religious feeling, providing a sense of community and common heritage for those who have rejected religion. X users are frequently known to use religious language in describing X. Terms such as “evangelism”, “persecution” and “martyrdom” are used. Many users view their devotion as a battle between good versus evil, with evil frequently being Z.

Outside, there were few lights on and the stars in the sky were visible and “just amazing”, according to the song’s co-producer, Ken Nelson.

While composing the song’s lyrics, _______ could not find the right words. He was thinking of a specific word, which he deemed a missing key word in the lyrics, to fit the song’s concept. He looked around the studio and found the telephone directory yellow pages, which happened to be situated nearest to him. ________ later titled the song X as a reference to the directory. He quipped, “In an alternate universe, this song could be called Playboy. The lyrics progressed from there with the band collaborating. Bassist ____ ________ came up with the opening line That night, having quickly composed the song, the band recorded it.

A much different origin of the song was told on The Howard Stern Show in November 2011. ______ explained to Stern that he was impersonating Neil Young while entertaining guests when he came across the first chord of the song, which stuck with him for a bit then in a Neil Young voice he sang the opening line . _______ went on to further explain that the word X has absolutely no meaning whatsoever and while writing the rest of the song he tried his best to change X to something else since every lyric before X made no sense but in the end the word X just sounded right. _______ also told Stern that through the years depending on the attitude and manner of whoever interviews him, he would make up some story about a song or album titles just to move on to the next question. _______ applauded Stern saying “I like you, Howard, so that’s the first time I’ve ever told anyone the truth behind X.”

The founder of X, Amancio Ortega, opened the first X store in 1975 in a central street in downtown A Coruña, Galicia, Spain. Ortega named his store Y after watching the classic film Y the Greek, but apparently there was a bar that was called the same, two blocks away, and the owner of the bar came and said, “this is going to confuse things to have two Ys.” They had already made the molds for the letters in the sign, so they just rearranged them to see what they could find, and they found X! The first store featured low-priced lookalike products of popular, higher-end clothing fashions. The store proved to be a success, and Ortega began opening more X stores throughout Spain. During the 1980s, Ortega started changing the design, manufacturing, and distribution process to reduce lead times and react to new trends in a quicker way, in what he called “instant fashions”. The company based its improvements in the use of information technologies and using groups of designers instead of individuals

X is a 19th-century art movement that originated with a group of Paris-based artists. Their independent exhibitions brought them to prominence during the 1870s and 1880s, in spite of harsh opposition from the conventional art community in France. The name of the style derives from the title of a Claude Monet work, _______, soleil levant (________, Sunrise), which provoked the critic Louis Leroy to coin the term in a satirical review published in the Parisian newspaper Le Charivari.

X painting characteristics include relatively small, thin, yet visible brush strokes, open composition, emphasis on accurate depiction of light in its changing qualities (often accentuating the effects of the passage of time), common, ordinary subject matter, inclusion of movement as a crucial element of human perception and experience, and unusual visual angles. The development of X in the visual arts was soon followed by analogous styles in other media that became known as X-ist music and X-ist literature.

A recreation of the super-famous Nirvana Nevermind cover. Id the dude.